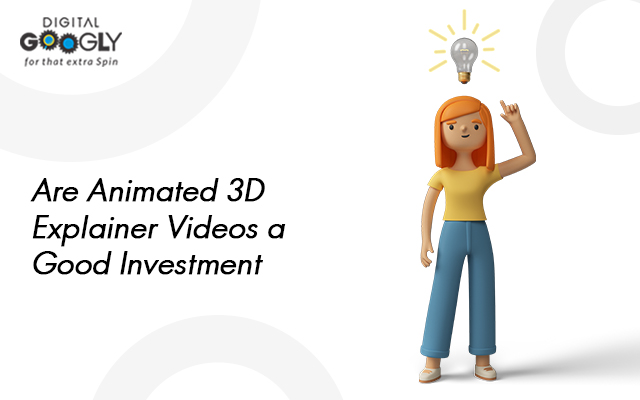 Some people believe that 3D explainer videos are high-tech. Others argue that it is prohibitively expensive, and that it is a waste of money for some. Let’s get down to each minor element and figure out when and how you’ll need it.

Of course, you should keep in mind which styles are most effective in conveying your idea.

3D Explainer Videos: What You Should Know

Let’s get a little more into this.

When is 3D the Best Option?

Assume you wish to display your product details, which are somewhat complicated. You’ll need to show the ins and outs of each item, as well as how the mechanics function and possibly how it’s constructed. In this case, 3D is unquestionably required, says an animation expert associated with explainer video production in New Jersey.

Your goal is to describe your product in a way that demonstrates what it would be like to hold it in your hands, open it up, separate the pieces, and inspect all of the inner workings from every perspective.

2D animation wouldn’t be accurate, and live-action wouldn’t be able to give the same kind of “inside look” or show every last detail unless the video was considerably longer and more sophisticated.

It’s awful when a 3D video is made solely for the sake of being 3D. Allow a New Jersey-based animated explainer video producer to explain.

Assume you need to explain how your software functions. Why should people be distracted by flashy animation? They’ll pay less attention to your content in order to concentrate on the pictures. A great-looking 2D motion graphics explainer video can help you explain how something works or help you tell a story.

Furthermore, 3D animation is an extremely costly technique of animation. Even the largest businesses and organizations do not employ 3D unless there is a specific purpose, such as the one we described earlier.

What if You require 3D but lack the financial resources to do so?

In this case, an executive working in a 3D animation agency in New Jersey recommends a hybrid approach: use 3D in critical scenes (again, complex product breakdowns) and 2D for the rest of the video. You’ll save time, money, and achieve your 3D goal.

Let’s pretend you have a medical device to explain. In 2D, you can discuss consumer problems and pain areas, then transition to 3D to display the product inside and out, then back to 2D for benefits, the call to action, and the rest of the film.