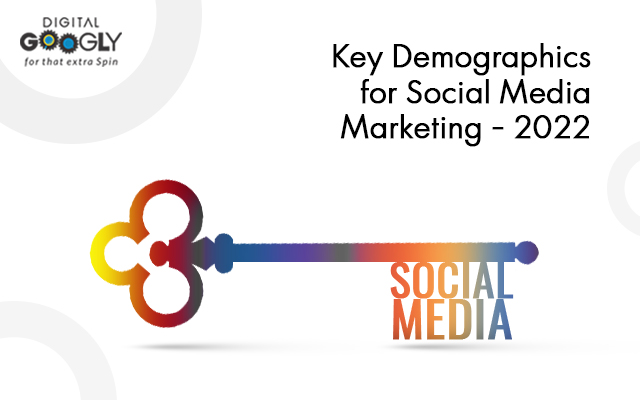 Business without social media is like a goldfish in a tight bowl. It looks cute and all, but as time goes by, it will shrink, shrink and shrink some more. Therefore, if your brand is not yet using social media to its full potential, it is time you get going.

But, to be a successful social media marketer, what you need most is data. Without the correct data to back your strategy, it is next to impossible to make a mark amidst a crowd of billions.

However, no need to sweat on it. Digital Googly US, a social media marketing agency in New Jersey, got you covered.

We present the essential demographics of the top 5 social media platforms to help you inform your brand’s strategy in 2022. (The numbers below are based on the latest research and the data gathered)

• Despite ongoing controversies and emerging competition, Facebook retains its throne as the most popular social platform among consumers and marketers.

• Facebook’s user growth rate continues to slow, with only a 0.8 percent increase expected in 2021.

• Despite the slowing growth, ad revenues continue to rise, demonstrating the importance of Facebook ads for marketing, according to Digital Googly US, a digital marketing company in New Jersey.

• TikTok does not have the massive user base that Facebook does. However, its popularity and growth are unprecedented.

• Activities are increasing in tandem with the user base, with users spending nearly 90 minutes per day on the platform.

• Studies show that nearly 40% of Gen Z is directly influenced by-products they see on TikTok.

• As the user base expands, brands and influencers are also joining in, says the SMM experts of the social media marketing agency New Jersey.

• TikTok is ramping up to meet its users’ needs, including more advanced ads and CRM integrations.

• The platform’s user base has doubled to 2 billion in three years.

• However, Instagram is no longer the only “hip” network in the eyes of teenagers. TikTok is quickly catching up to Instagram, luring influencers away from the platform.

• That said, Instagram still has a stronghold on Gen Z and Millennials, who account for roughly two-thirds of their user base.

• With the introduction of new shopping features (such as Drops), the platform is gradually becoming an e-commerce hub.

• Reels are popular, but they won’t be able to stop TikTok’s growth in 2021 as the platform continues to lure influencers away from Instagram.

• The platform user base is steadily getting younger.

• Despite recent growth (from 187 million users last year to 211 million in 2022), research suggests that the platform will lose about a million users to other platforms over the next five years.

• Twitter’s user base is highly educated and well-off (one-third of users have a college degree and earn more than $75,000 per year).

• While Fleets failed, renewed interest in Spaces could give the platform new life. (Twitter Spaces is a place where you can have live audio conversations with other Twitter users.)

• Marketers believe that YouTube is still a land of opportunity in terms of advertising and is a better place to put ad dollars in the future than Facebook (hint: YouTube’s ad revenue increased 43 percent year over year).

• The platform’s revenue growth indicates that it is not only a social network but also a go-to streaming service.

• With 62 percent of YouTube users logging in daily, the platform has no user engagement or retention issues.

• Most YouTube users claim that they use the site for entertainment rather than researching brands and products. On the platform, brands still have a lot of work to do to balance entertainment and advertising.

The data mentioned above is generalized across billions of users and is a starting point for your brand. If you want to broaden your reach, look into the demographic data from your own social media presence and compare it to the averages above. If you need any assistance strategizing your social media marketing, you can contact Digital Googly US, the best social media marketing agency in New Jersey.